My darling Archachatina marginata suturalis has laid a HUGE egg a few months ago, it was almost one and half centimetre long (0.6 inch) and yellow in colour. I read somewhere that these snails lay a few "testing" and usually unfertilised eggs before they lay a proper fertilised batch that they bury in the soil. This single egg was on the surface of the substrate. I took care of it, kept it in a special box, maintained humidity and took care that no harm happened to it, waited one week, two, a month, month and a half... And after two months a hole appeared in the egg and the insides were all liquid and smelly. It is not very surprising since Jedi is the only A. m. suturalis that I keep, since his/her partner died as a little one, but maybe I was just hoping for some miraculous self-fertilisation...

Anyway, here's the picture of an egg and a snail, both on my hands, picture taken by my dear man. 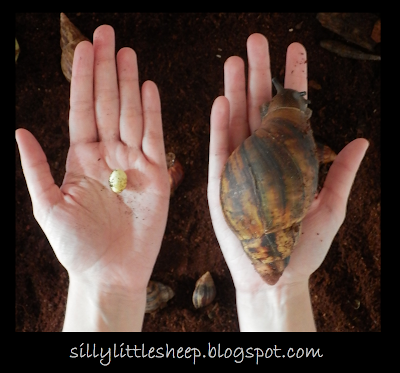 However, in spite of this reproductive unsuccess (if we don't wat to use the harsh f-word from the title), he is still as charming as always and even starred in one of my youtube videos, made during his autumn walk outside. You can view it here. Let me know what you think!!