Not much is going on these days... It is even colder than before, the pond has frozen and it keeps snowing perfect hexagonal snowflakes that reflect the light of street lamps in the evenings. I prefer to spend my evenings at home, where I take care of my pets and plants and try to do a bit of reading (preferably frequently interrupted by episodes of How I Met Your Mother, The Simpsons and short bits of Pride and Prejudice).

I snapped these photos last night, when my biggest snail Jedi was just "getting up" from his all day long nap to enjoy a piece of crunchy lettuce and later interrupted my good night's sleep with his crunching :)
﻿

UK Flashbacks - Eating out in Guilford 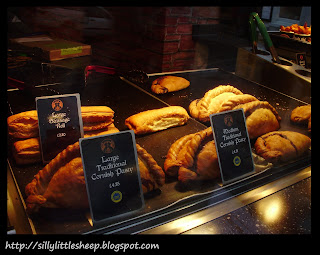 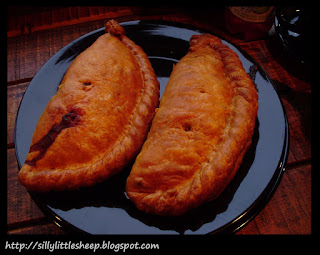 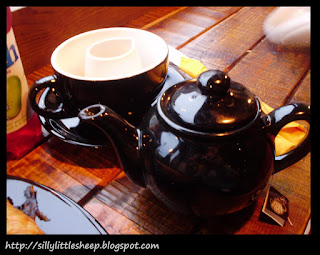 It has been a few weeks since I returned from my last trip to England, but it is only now that I am starting to feel the real symptoms of abstinence. I miss my man, I miss speaking English and mostly, I miss the feeling of being on holiday, going out for cups of tea and coffee, sightseeing and doing silly stuff.

During my stay, we visited one of the West Cornwall Pasty restaurants in Guilford and had a large Cornish Pasty each, with a pot of lovely Earl Grey tea to go with it. It was extremely delicious, so I really want to share. It was the first time that I went to West Cornwall Pasty, but if I ever have to pick a place to have lunch and WCP is near, I know exactly what it is going to be!

(The only trouble with it was that they did not have a toilet, or so they told me. With selling big pots of tea, I am not sure it is a good solution).

I know that many people say that the British cannot cook and I honestly do not know where these myths come from. I have a thing for certain British foods (pasties and pies for example) and then dislike others (such as Scotch broth and pork pies - bleh!), but to say that a whole nation cannot cook is a horrible overstatement.
3 comments:

I have prepared a special treat for my snailies this time - inspired by Girl on Bike and her post about using egg shells in the garden and also inspired by this book, I found my own way of dealing with used eggshells. The snails need a source of calcium for their shell to grow and be strong. I used to buy cuttlefish bones, but with the rate at which they consume these yummies, it did cost a bit of money now and then. So I started giving them ground eggshells that have been baked in the oven or microwaved for a while (to get rid of possible parasites) and mixing it into their food.


When the winter days are gloomy and dark and the atmosphere is bored and sleepy and unhappy, I tend to spend a few happy moments taking care of my pet snails (I have talked about them before). It is really satisfactory to see them burrying their little faces into the mix of apple-flavoured baby food mixed with ground eggshells. 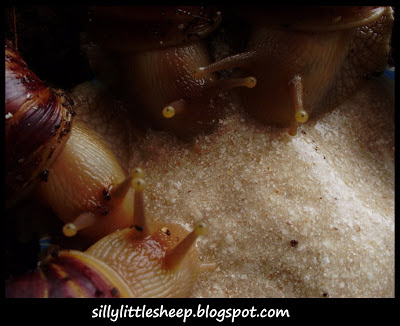 ﻿﻿﻿﻿﻿Snails are nice to look at, interesting to get to know and as I also saw before, are quite inspiring and educational in the classroom for kids and adults of all ages. They are not furry, so are quite ideal for people with allergies. They are also really easy to keep and can survive for quite a long period of time without food or water, in their shells - perfect for people who are out of home a lot.
﻿
However, due to their invasive nature, giant African land snails are not allowed in certain countries (such as the US), but there are still many other smaller snail species available.

Some interesting links for you: 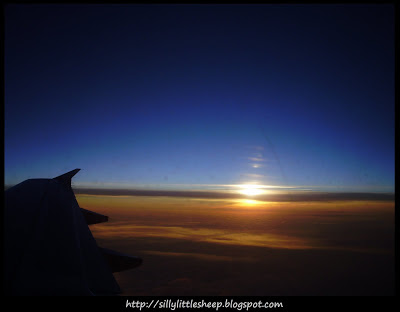 I saw this wonderful above-clouds sunset during my flight from London to Prague this Saturday. And it totally made my day, and that really is something, as the day also included being sick in the aircraft lavatory.


I am not a New Year's resolution fan, but here I can make a little exception and saz, with total confidence, that I will never EVER again combine M&S prawn and mayonaise sandwich with a cappucino and then fly.

This one I am going to keep, I just know it.
I know many people fly in the world every single day and they do not show off their photos, in fact most of them do not tak photos during their flights at all, but the world up there never ceases to fascinate me. I remember flying there and back when I was studying abroad and I have seen the other side of clouds during sunrise, sunset and at night,  in every possible colour and still I cannot help but reach for the camera. Most of the times, I wonder whether people in the past imagined what it must look like above the clouds and whether what the y imagined was in any way close to the reality we get to see when we fly. And also, I feel incredibly privileged that I get to see this myself. 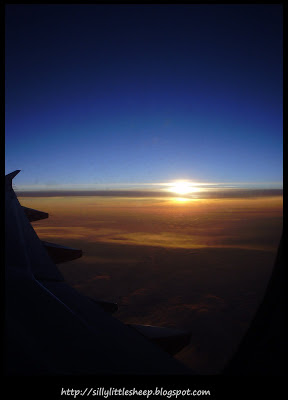 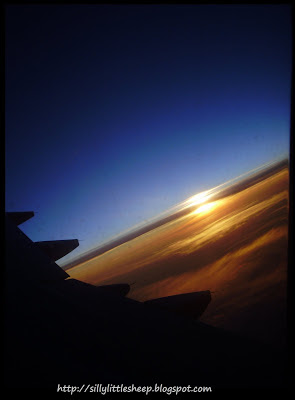 I did not write for some time, because I welcomed the new year in a far-away land of green hills, frequent rains, rabbits hopping in the fields, foxes casually walking in the streets, birds screaming at 2 a.m., morning mists, mossy lawns, mince pies, cups of tea, hobbits and "Keep Calm" posters.

Let us all have a great year 2013 and let's live a better life than before! 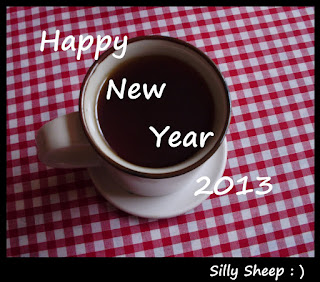 For me, 2013 will be a great one, as I am going to finally finish university and find a job and finally stand up on my own feet. Wish me luck, recycle and always find time for a good cup of tea and rest
;-)

Winter Visit to the Cottage - Footsteps in the Snow 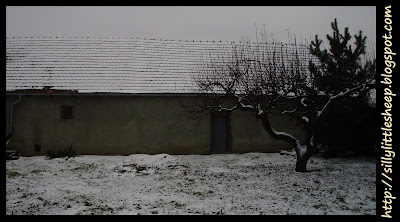 Compared to our autumn visit to the cottage, which was bright, sunny and lovely, this post-Christmas one was dark, cold and slightly snowy. I was not the least bit excited when we had to stop there on our way to our Hungarian Grandma, however, there were many animal tracks in the garden to occupy my mind for the amount of time that was necessary to spend there. While I am completely positive that the first tracks were made by a cat, the following tracks got me slightly confused and I identified them as squirrel later on. However, if there's any track-reading expert amongst you, I will be happy if you correct me. (I am sorry that the pictures are so dark, but in that weather, they were really the best I could do with my camera)

I never really liked being out during winter (except for a brief period of my life when I enjoyed skiing), but this puts a whole new perspective to winter time. Now I keep wondering whether making a plaster cast of animal footprint in the show is very different to making casts of prints in the soil. 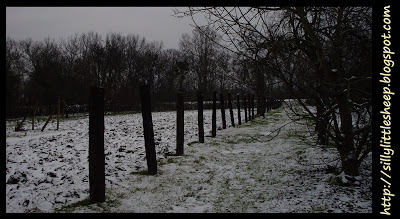 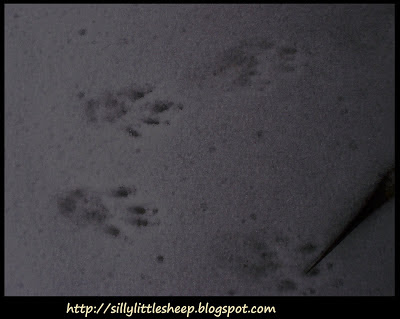 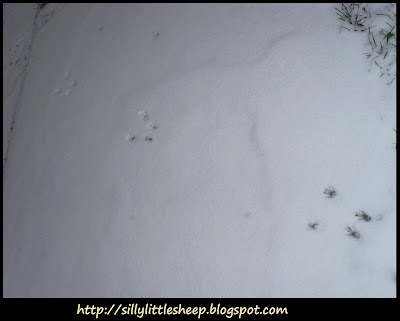 This Christmas, my beaded star decorations made it to our table. I also made some origami stars that I learned to fold at the Advent origami workshop out of wrapping paper leftovers from last Christmas and my mother grew so fond of them that she put them on the Christmas tree. 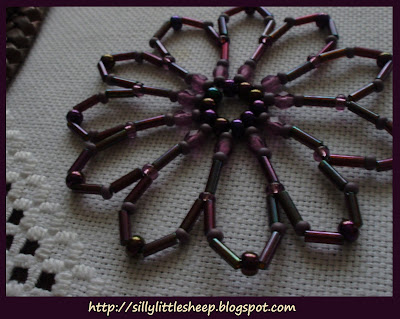 My beaded decoration also made it to my Grandma's Christmas tree, however, when we looked for it, we couldn't find it. Either she is old and forgetful and doesn't really remember where she puts stuff or it was stolen - and no matter how much it would flatter me that my work is being stolen, I'd rather see the star on the tree where it belongs. 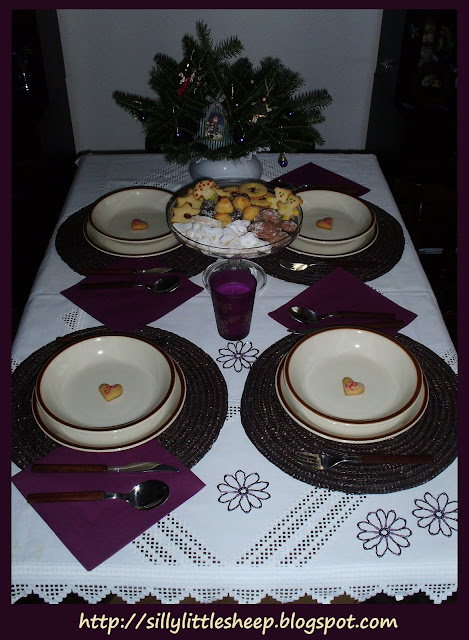 
Most of the traditional baking is done by my mother in Slovakia and every year I come to a finished thing. However, the Christmas spirit creeped upon me too this year and I started baking simple little yummies myself.
I am pleased to say that my first mince pies went well.
I also tried cutting out star shapes out of press-shaped pastry ( that I bought in a supermarket ) like before, except for changing the order in which I made the pattern and the shape – pattern first, then cutting out. Pressing pattern onto the star would totally ruin it. It was great fun. 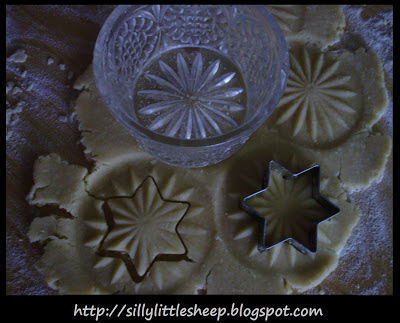 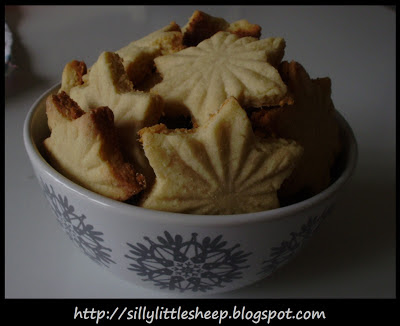 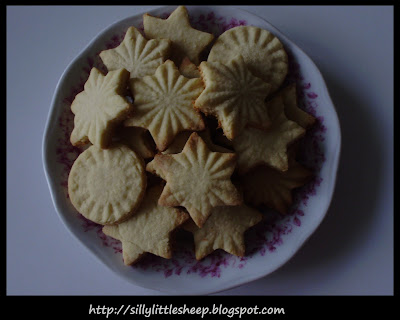