Christmas is already over, so I am going to show you the presents that I got for my family and friends - in the wrapped state :)I bought lots of tea and cake cutters and some cosmetics this year.

Only the closest family and best friends got a bigger presents, the others got a little Christmas greeting card with a beaded decoration. Making these was really easy and fun - just some hard paper, funny crafty scissors, my handmade decorations, tw holes, wire or string to tie them to the card and golden gel pen to write the wish. 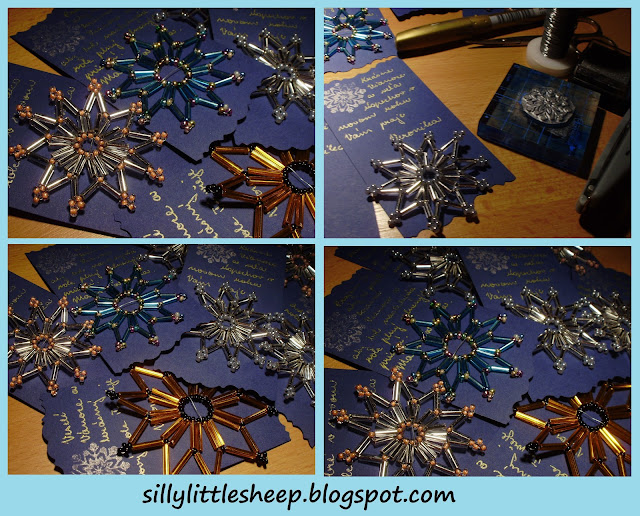 The larger presents I wrapped in  my handmade wrapping paper that did not cost anything - I talked about it before and I am talking about it now - every time I bought something at IKEA and carried it home wrapped in brown paper, I saved the paper and later stamped snowflake stamps all over it. At first, the snowflake pattern was much denser, but later, inspired by Unify and her Christmas wrapping paper, I only stamped a flake here and there and I was quite pleased with the result.

I enjoyed making and wrapping all this, but to be honest, I will not miss the Christmas-themed crafty clutter that filled half of my already disorganized room : )
No comments: 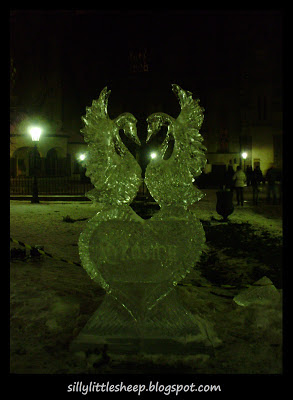 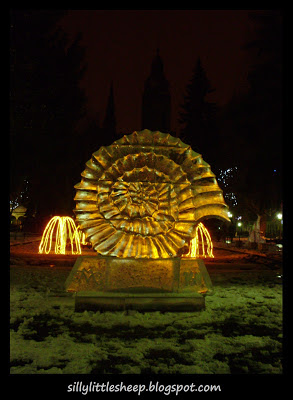 Last year it was the first time that ice sculptures appeared in the Košice city centre. This year, they are here again, very beautiful and slightly melted as the temperatures go up and down. Unfortunately, I didn't see how they were made (which, as I am told, also happens directly in the city centre and people can come and watch), but even simple seeing them in the lights of festively lit city was quite an experience. The theme of most of them was "The End of the World". 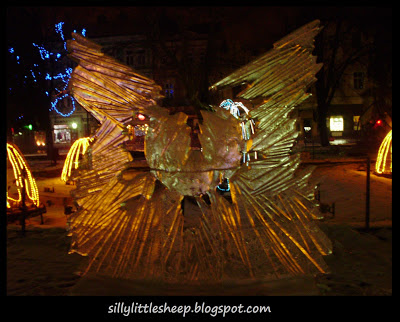 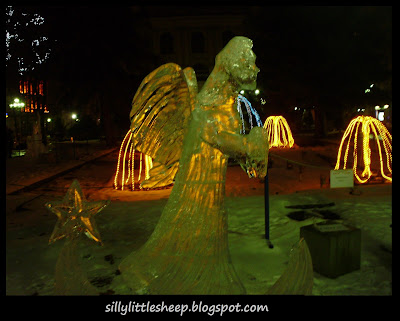 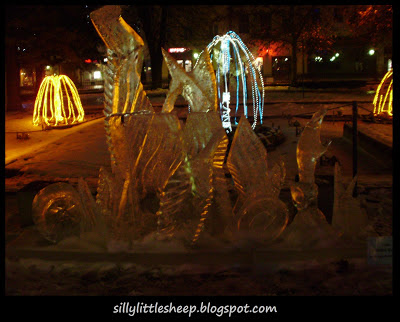 So I'm at my old home in Slovakia. It's kind of cozy :)
No comments: 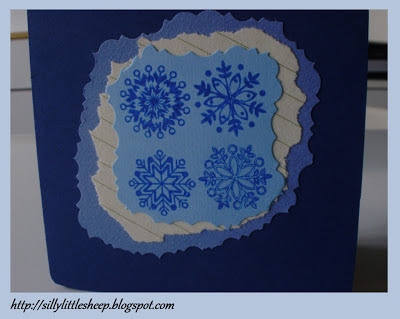 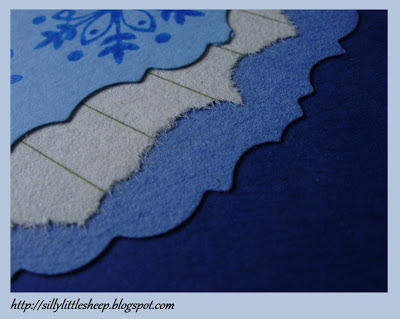 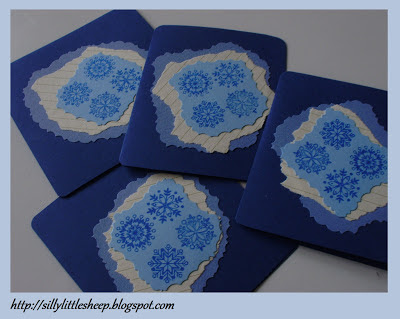 What I brought home from Christmas origami workshop by Papelote 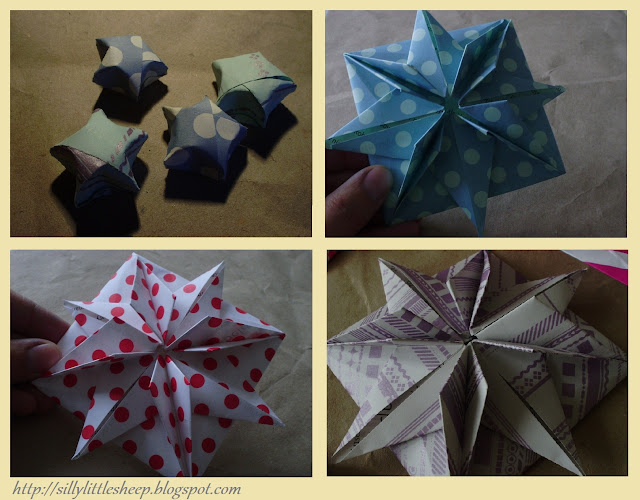 My friend and I have visited an origami workshop organised by Papelote - a Czech stationery shop - which was advertised on their Facebook fan page . The theme of the workshop was "Christmas stars", but we also learned how to fold a crane and how to make about three types of stars. 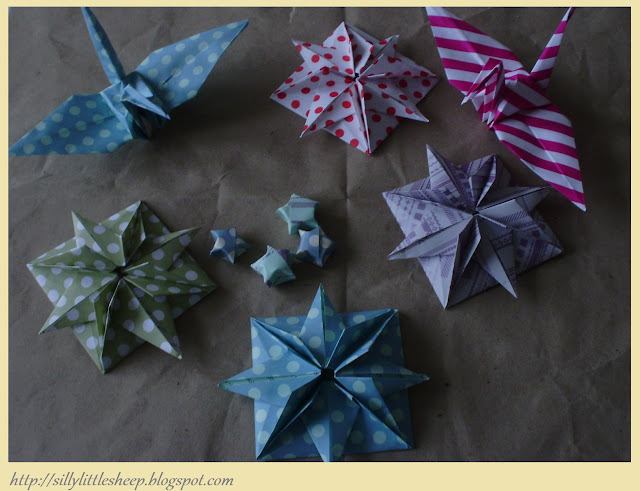 All of these can be stuck to cards or hung on the wall or Christmas tree. And made of some really nice Christmas wrapping paper, they could look really gorgeous. One more thing I can do during my Christmas holiday :)

Getting into the Christmas mood 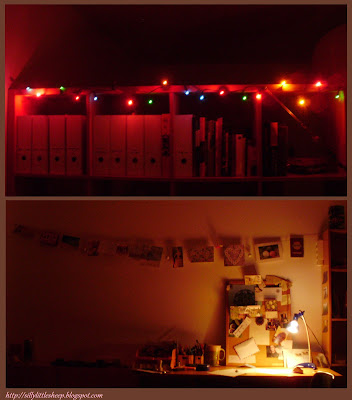 When I said that I want to have all the presents bought long before Christmas and then just sit at home and bake and sip hot tea, I didn't really think about all the work- and uni-related stress that was about to come. Things need to get done before everyone leaves and people started to stress. The post offices are full, shops are crowded, people worry about not having the presents yet, about messy homes, not having baked yet... And it sometimes makes me wonder why is Christmas still considered to be a holiday of joy and peace, when eighty per cent of the people that I encounter daily are not happy nor peaceful.

So right now, as most of work is finished, I decided to spend more time at home, tidy up, bake and decorate a bit. I do not have a tree this year, but I have put the lights up about a month ago and I hung all my pretty cards on a string above my desk. A few Christmas cards have come in the post and I believe I might be getting some more during the holidays, so I will have a nice display eventually. 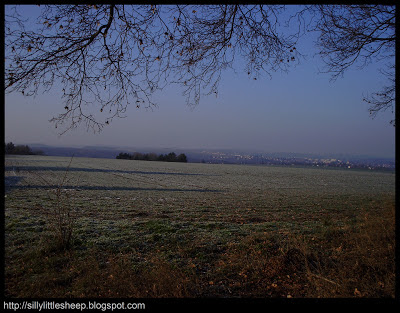 In spite of my getting better but persisting cold, I decided to go out today, for a walk around the neighbourhood. So far these days are the coldest that we have had this winter. There is still no snow, but all puddles and the pond are frozen and everything around is covered in frost. And in the sun, I swear it sparkled more than vampires from Stephenie Meyer's novel. 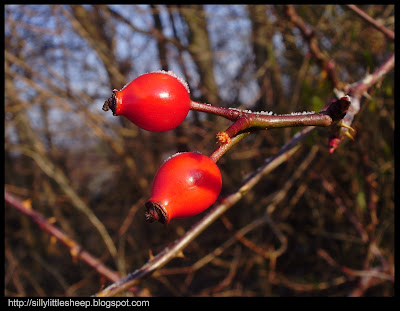 I met a woodpecker, some other birds that I did not know and even found tracks of some larger four-legged forest visitors in the field. 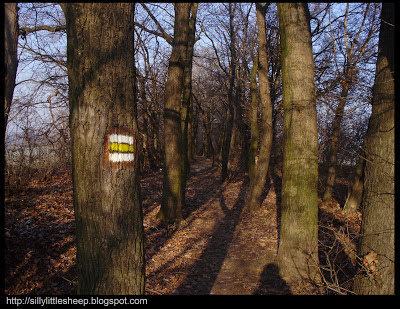 I even walked through the “alley” that I nicknamed “the undergrowth of dread” sooner in the year when I moved in. With no leaves on and sun shining onto them, the trees are much less scary.
3 comments: 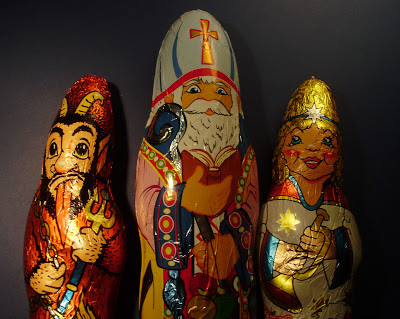 Today is a special day for all the kids and many adults in Slovakia, Czech republic and many other countries. Mikuláš is a Slovak/Czech name for the Greek saint Nikolaos of Myra – who is believed to bring sweets to children during the night from 5th to 6th December. Even American Santa Claus is based on this historical figure, although he brings presents at Christmas (in my country we say that the Christmas presents are brought by little Jesus).
According to Wikipedia, there are many versions (some quite rough, not really for kids) of the legend which resulted in this custom. The one told to me when I was a kid is this one:
There were three daughters in a very poor family. Because they were poor, the daughters could not marry. Every night the daughters cleaned their shoes and put them into a window. One night, as bishop Mikuláš passed their window and filled the shoes with money. The girls found out about this when they woke up, on the morning of the 6th December. Therefore the girls did have enough money to get married and they were happy.
So nowadays every kid should put their shoe into the window on the evening of 5th December and as Mikuláš will go around, he will fill it with sweets (usually he knows well which ones you like and even though he does not fly, does not come in though a chimney and does not have a reindeer, he will usually get to you, even if you live in a high floor of a block of flats).
Mikuláš is pictured dressed as a bishop with tall cap. Santa dressed in red and white is often getting into his place but I personally prefer to buy chocolates that look properly bishop-like.
He comes to people with two helpers : "anjel" (angel- the good one, usually pictured with wings and in a light dress, mostly with long light hair) and "čert" (the opposite of angel, he lives in Hell, has horns and tail, sometimes also hoofs and sometimes is pictured with long tongue), who is supposed to give coal to the bad kids. When I was a kid, we used to go to my Grandfather’s work and when Mikuláš came, we had to say a short rhyme, sing or play something to him and we were rewarded by a bag of candies, chocolates and nuts. “Čert” was spitting fire and everyone was scared of him, some even cried (even though we knew exactly which Grandpa's colleague it was).
Here in Prague, you can even order Mikuláš to come to your home, he puts many leaflets on bus stops and similar places.
This year, thanks to me, Mikuláš will come to England too (I gave him my boyfriends address). However, can you please give him my new address too?? He is probably lost, because I move so often now, so he always leaves my sweets at my parents place. 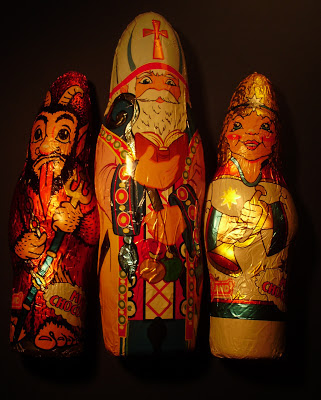 I have recently established Sunday as a free and stressless day. Of course, I do the basic stuff around the flat, tidying up, doing the washing, cleaning the flat when it’s my turn, but I never go to work on Sunday, nor do I bring my work home. It’s my day, it’s free and lazy. It is a day that I look forward to all week. Now I am absolutely no expert and definitely not a person to give advice on relaxation, but setting one day aside for nice and enjoyable things, sleeping enough, meeting friends and finding enjoyment in the basic household chores works well for me : )


Today, I woke up ill, so all I do is drink ginger tea with honey and lemon and make bracelets. I finished the one pictured below and I would list it, if only the sun came out for a while, allowing me to take brighter photos. 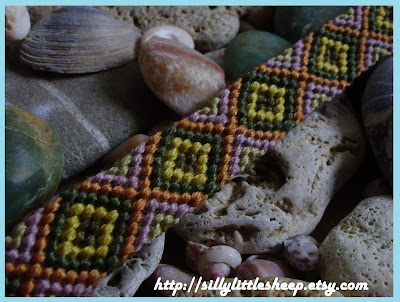