Our wedding day was full of happy moments, beautiful presents and lovely surprises. The biggest one of them was my kidnapping. It is a tradition in Slovakia that the bride gets "kidnapped" during the wedding - by the best man or someone from the family - into a nearby pub and the groom has to go and find her. I have agreed with my friend that she can take me for a glass of wine - simply for the kick of being in a pub wearing a wedding dress - when else do you get a chance to do that, eh? :)

So when my friend has taken me by the arm and starting pulling me away from the village hall, I went with her. But when we passed one pub, another pub and went down the hill where there were no more pubs, I got a bit confused. Instead of for a drink, she took me to a pet shop and there at the cash desk the guy handed me an envelope with a card inside that started "To my wife..." My husband has gotten us a baby Hermann's tortoise! 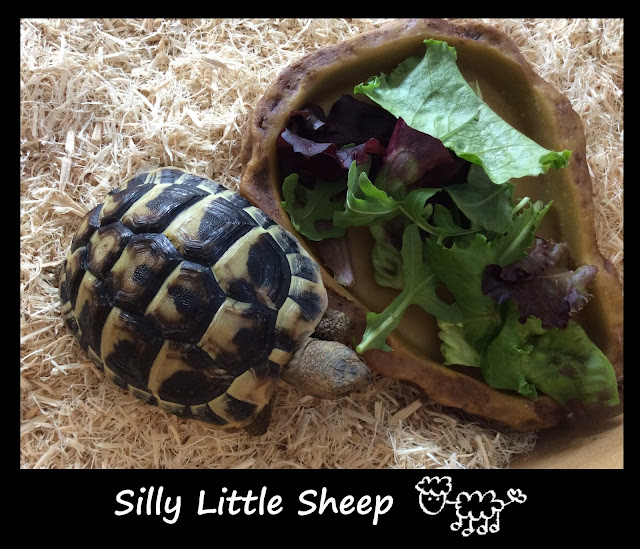 In spite of what it sounds like, this was not an impulse buy. We have been talking about getting a pet for ages and ever time we went to a pet shop, we spent ages watching the tortoises (although they are quite a rare animal to see in a pet shop around here). He had the whole thing arranged months in advance, researched the housing and built our very own tortoise table, bought the heat lamp and UV light which he hid from me in his workshop and bought the tortoise as well but he paid her a boarding fee in the shop so that she could stay there until our honeymoon was over. 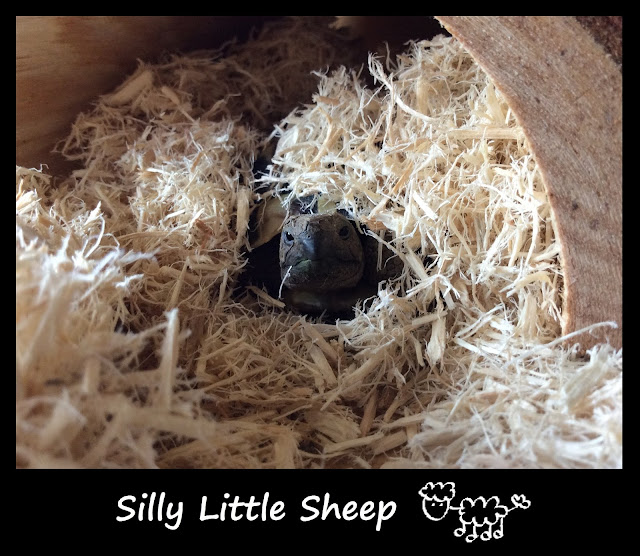 We brought her home and named her Rocket (because of her speediness, although the first thing she ate at our place was a rocket leaf which just made me think that the name is right for her in more than one way). Every night she digs herself into the substrate in her little house and she sleeps there, moving her little legs up and down as she breathes. In the mornings she looks around confusedly for a while and if I wait long enough, sometimes she presents me with a massive yawn before she shuffles herself under the heat lamp to warm up so that she is ready for breakfast.

She is a very eager climber. I still find that a bit weird, but very cute and amusing. She puts so much effort into it and I sometimes put a bit of food on the house as enrichment activit to prevent her from getting bored (She also has a ping pong ball and a toilet paper roll that she pushes around). 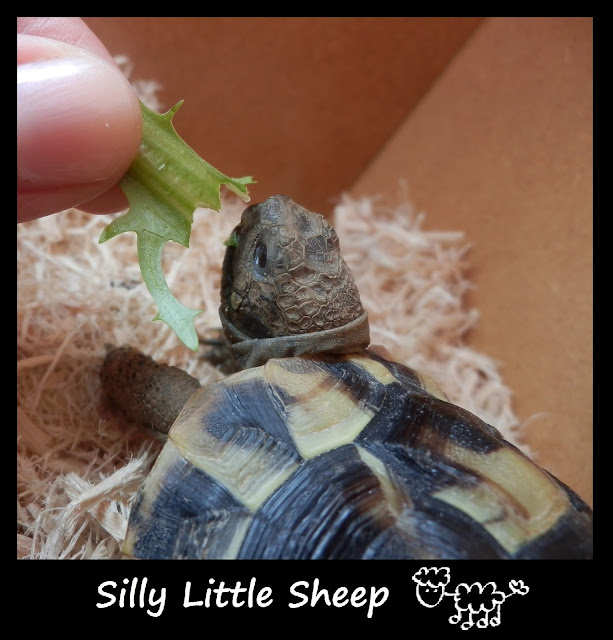 It is funny how something so small can bring so man changes into life. Ever day we decide who "does the tortoise breakfast" depending on who needs to have a lie in. On weekends when we naturally wake up a bit later, I often find myself feeling guilty tthat I am letting her wait and it gets me out of bed.

She has also completely redefined the way I see plants. Tortoises can eat so many common weeds - Rocket loves ribwort plantain and dandelions - that I look for them wherever I go. I even ordered some seeds and can't wait for spring to start. Yes, I am going to have a plantain/dandelion/deadnettle patch in the garden. My friends made fun of me, sayng that everyone is trying to get rid of the weeds and I plant them.

She is our little baby and I still cannot believe how lucky I am. One of the things I love the most is when I am still just opening m eyes in the morning and I can hear my husband in the other room talking to the tortoise as he brings her food. It makes me feel that life is pretty great and I am thankful.
2 comments:

One of the most fantastic events in 2016 was our summer wedding. Planning a wedding has been... Well, let's call it interesting. Being from two different countries with different traditions, what we imagined as wedding had been quite varied. There were moments when I worried about how will certain aspects of my personality that will project themselves into the wedding be perceived by the "natives" of the isles, I worried even more about how the English bits will be perceived by the non-natives belonging to my family (which is in itself a patchwork of Slovakian, Czech and Hungarian).   With the family flying in from afar and staying in our flat, it was sure to be a bit of a bumpy road, but all with a good old happy ending :)

Wanting to not spend a fortune, we decided to do many things ourselves. Apart from many "me" touches to the wedding like the moss and fern, there were also many "us" touches. After all the wedding was not mine only. The wedding favours were one of these touches. 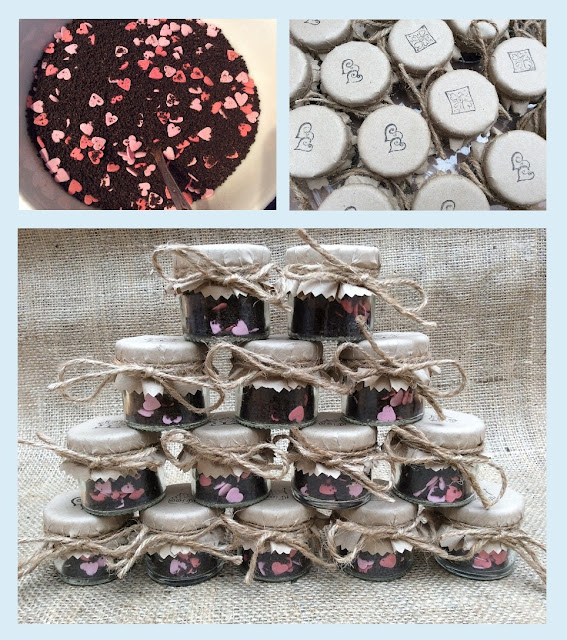 When we first met, our first conversation was about tea. In spite of being freedivers who generally stay away from caffeine, we both had a taste for black tea, which has brought us together. Therefore love tea favours were a must. Amazingly, we got all the little jam jars for free from a coffee and bagel shop where we both go so often that the owner knows us and agreed to save us these little jars. They are unbelievably cute (alnd also super expensive when you try to buy them in craft supply shops). I really enjoyed mixing the little sugar hearts into the tea. 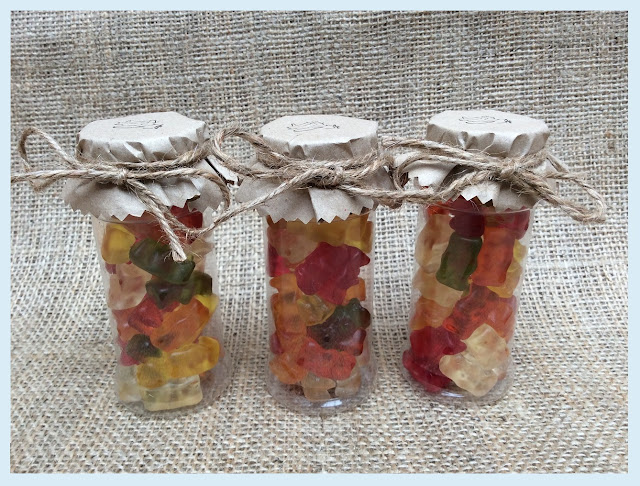 Since hubby has hundreds of metres of brown paper in his workshop, I used a lot of it in decorating. The bunting was made by my sister-in-law and her die-cutter and I made the seating plan and table numbers myself, with help of one image from Shutterstock which we also put on our wedding invitations and order of service booklets at church.

I have been saving glass jars from absolutely everthing all year and spent many hours decorating them with hessian, string and ribbons. One of the drawbacks was that because of the fire safety regulations we could not use real candles, but we bought masses of the little electric safety tea lights. We still use them at home - romance at a flick of a switch! :)

The chairs and tables belonged to the village hall where we had our reception, the tablecloths, crockery and cutlery were rented but the flowers, jars and hessian were all prepared and set up by us (well, a dedicated team of groom and a team of helpful family members and friends who worked on it for ages whilst I was having my hair and make-up done). 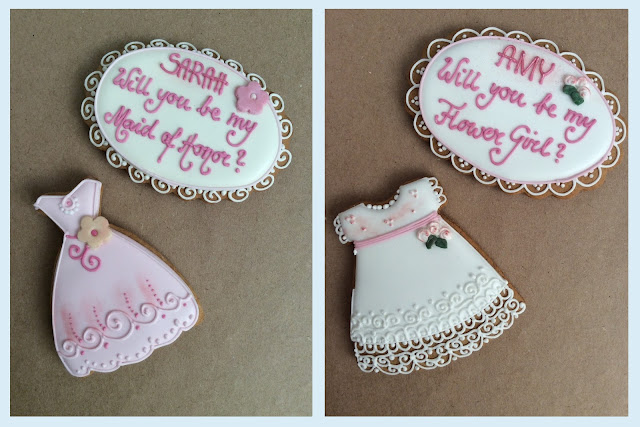 My flower girl and maid of honor both received a special set of biscuits which I got on Etsy from CookieArtLondon.

The cake was a Christmas-like fruit cake baked by my lovely father-in-law. He had it professionally iced and made the cake toppers himself - a snail and a piano! It was his super secret wood-turning/carving project and there couldn't be anthing better to put on top of a cake for us - a piano technician and a trained malacologist. :)

Well, that was the first day of our married life and I dare sa it left us completel shattered, even though it only lasted until  10 p.m. We tend to be a bit spontaneous and agreeable when we make plans, but we have never planned an event of this magnitude and importance, which meant there were a couple of disagreements on the way, but I am so happy we made it all the way here. Seven years have gone since we first got to know each other, five since we started going out and the rest of our lives is ahead!  I bet it's going to be wonderful :) 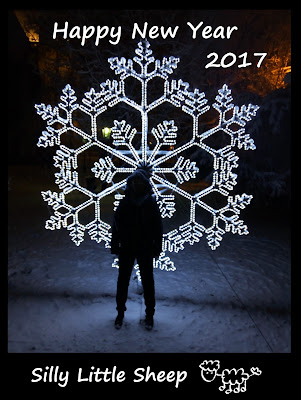 I feel like the year never truly ends in December, even though our new calendar in the kitchen says so. Yes, it is 2017, but life still moves at the sluggish pace of Christmas holidays, at least for me. Everything will be different tomorrow, so I have to write this post today before the business of working days takes over.

I am glad for everything that happened in 2016. There have been moments when I felt completely free and there were times when I felt trapped. There were days when I was happy to be on the right path in my life and then there were some when I questioned whether this is where I want to be. It has brought many scary moments and annoyances but also the absolute joy of being someone's wife and having a whole rest of my life to look forward to things.

I am not setting and resultuions this year. I find that I can never keep them, because life, that funny thing, always gets in the way. Things are going to be changing. My friends are having babies, our niece is growing up way too fast, the flat we live in is being sold. We do not know where we'll end up in 2017, but I am excited about the journey and ready to embrace what will come. I hope you are, too. x
No comments: