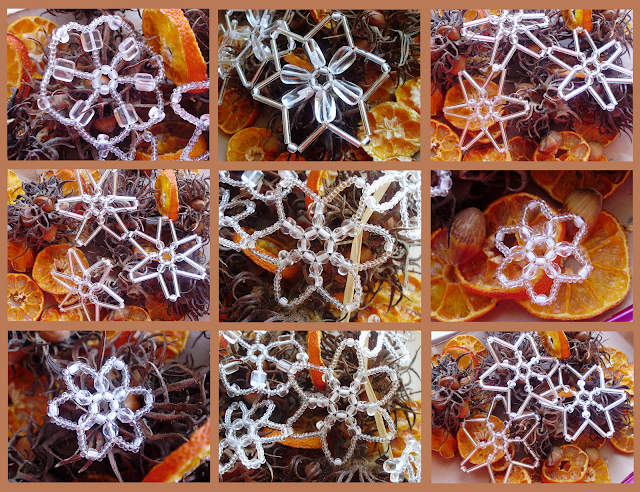 It is only four days until Christmas now and everybody seems to be rushing around to make the last preparations. Post offices are crowded with people sending or picking up their last-minute Christmas presents, people moaning on Facebook that they have not bought the presents yet and madness going on in the supermarkets as everybody tried to get SOMETHING! 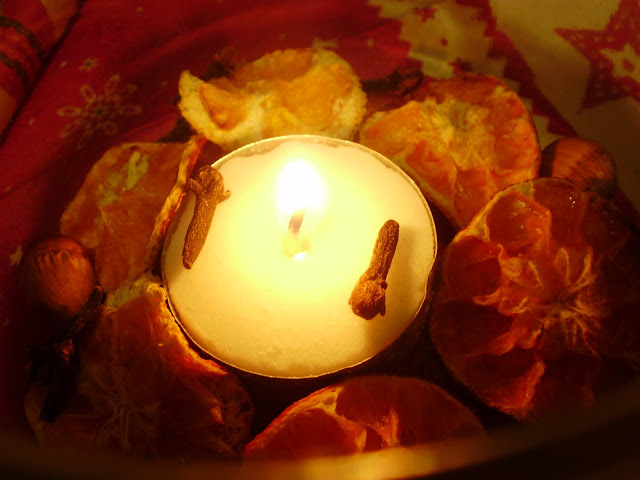 I must admit, I could do better myself as well. Every year I have a resolution to do my shopping throughout the year, so that I pick the right present for everyone. Every year I have too little money to shop in December. I send my Christmas cards late. I am chaotic and I mess up a lot.
On the other hand, I was quite successful this year too! I managed to decorate my first Christmas tree, I made handmade cards for a few of my friends, I wrote a few nice emails and I wrapped my present beautifully. And in all that, I managed to make some really beautiful decorations, for which I did not need to go to a shopping centre, but enjoyed making them at my warm home while drinking tea and eating biscuits :) 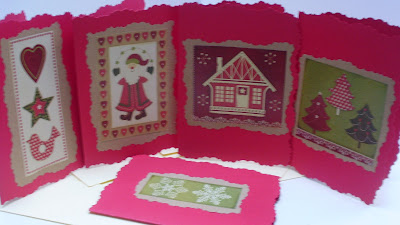 I hope you all will be able to find a few moments for yourself, to relax and to rest while surrounded by the ones that you love and will not be the victims of stressful and materialistic Christmas time. Merry Christmas.

I made some FIMO polymer clay beads in the past, but never thought that I could actually be the person who makes jewellery or anything like that. That was not for me, I was making bracelets, I thought. Well, until now!!!

At the end of summer I got inspired by a friend who showed me her beaded Christmas decorations in shapes of snowflakes, stars and angels that she made for a Christmas fair that she's going to take part in. It did't look difficult, so I decided to try it too. 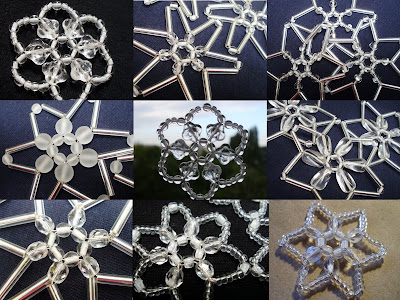 These are my Christmas stars (rather than snowflakes) made of glass Czech beads bought mostly at Starbeads and Rooya. If you happen to be in Prague and are bead-crazy, you should definitely visit these two shops! You are going to be pleasantly surprised.
I made little sets of these stars and listed them in the Christmas section of my shop. A few of them are sold now, but there are still some left. Everything that doesn't sell until Christmas will be available in the next year as well, so that you can keep shopping all year round.
No comments:

This summer I decided to make some changes in the look of my etsy shop. Everybody speaks about how important it is to have good photos and some people even hire others to take nice pictures for them, so I thought that I might get some nice idea how to make the pictures of my items more appealing. Not that I thought they were bad, but a little change might give the shop more personality and freshen it up a bit. 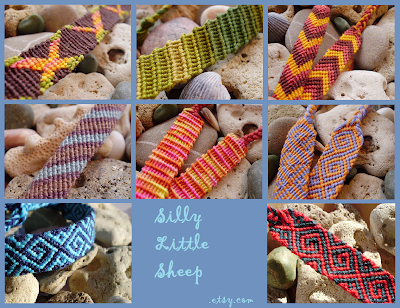 Friendship bracelets are summer accessories and as such, I wanted the pictures to look as beachy, summery and carefree as possible. That is why I chose to use the rocks that I collected at beaches all over Ukraine as backround for my bracelets. I must admit I think it was a good choice. 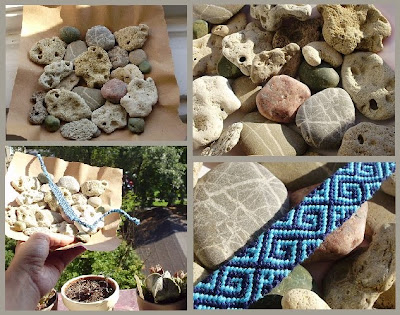 And in addition to all of this, there is also a renewed banner, which matches the new photos!!

I don't even know how the idea of visiting Ukraine, particulary Crimea, came into the mind of my friends, but when they asked me to go camping with them, I agreed.

As soon as I announced my plans at home, I met with a wave of disagreement from my parents, almost threatening and forbidding me to go. However, none of my friends were scared and so I just kept deleting my mother's e-mails containg the worst experiences of anonymous people from the Internet.
My first impressions of Ukraine were that it is huge and very very flat. Really it looked as if someone took eastern Slovakia (where I was born and where my family lives) and stretched it out, so that it was bigger and flatter. Yes, it does have mountains, of course, but to get down to the Black Sea, we had to go a long way through flatlands covered with fields and villages, sometimes with very bad roads. However, we did it and except the days when we had to drive a lot, it was amazing. We camped nearly everywhere, next to roads, on the beach, close to a vineyard... The Black Sea offered some wonderful views and I particularly enjoyed snorchelling with hundreds of unstinging jellyfish which seemed to be at every single beach we went to. 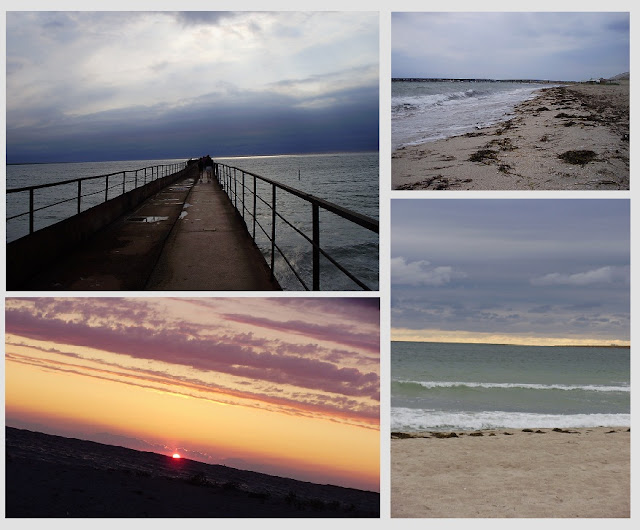 I am not going to pretend that I know something about history of the country or so. All the information I got was from the Lonely Planet guide about Ukraine that we followed. But even then, the impressions of some places were overwhelming. Some places did not look like Europe any more, because in the past it was controlled by many interesting nations, including Cimmerians, Greeks, Goths, Huns, Bulgars, Byzantine Greeks, Ottoman Turks, Tatars and Mongols. 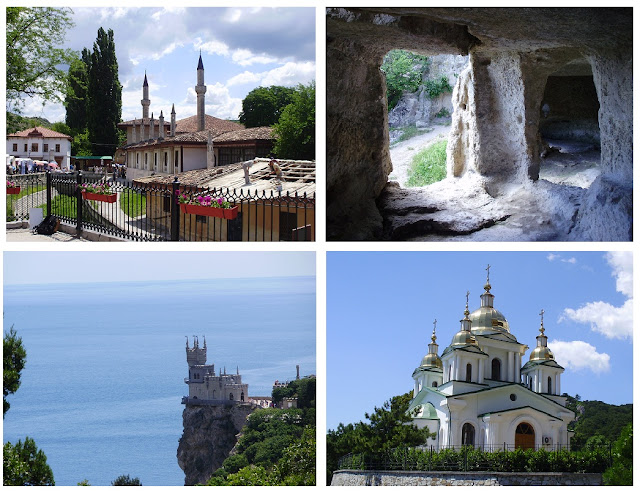 The food in Crimea is also unique and delicious. Because it was quite cheap, we had one meal in a restaurant almost every day. We enjoyed traditional soup called borscht and many other meals, such as dumplings called manti, plov, which is made of rice and called differently in many languages and sarma, minced meat wrapped in a grape leaf. 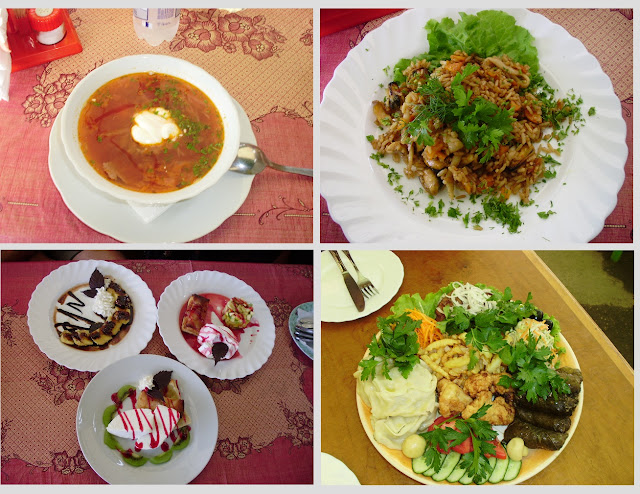 It took us around three days to learn how to read Ukrainian writing (I had it easier, because I studied Russian for about two years at high school) and even though almost nobody could speak English, but we managed with Czech and Slovak, some basic Russian and phrases from Ukrainian conversation book. Yes, it got funny sometimes, but it is a trip that I will never forget :)
No comments: