I dug through the waste paper bin that we have at our staff room last week and I couldn't believe my eyes. My wasteful male colleagues have thrown away a great lot of colourful paper. just used pieces, surely, but very nice colours and considering the fact that many times children only use little bits in their art and craft lessons, I thought this could be useful, either to supply them with some paper when they forget to bring their own or to add to the colour range they can use (not to mention there is a whole lot of fun I can have with it, too!!) And a little bonus - not only I found a lot of lovely paper, but also a paper bag to take it home in and in the bad, there was a forgotten bag of English breakfast tea - my favourite tea! Reusing materials does pay off!! :)

Bits of Garden on My Plate

It's the first time that I used the bits of my windowsill-grown plants to add to my food. This bruschette-type snack contained some of my home-grown spinach and chives. All the other things were bought, but it felt great to eat something that I grew myself. This is my spinach container. The plants are starting to flower, so I'd better consume them soon. The name tag is made out of a used plastic coffee stirrer that I got somewhere, I don't remember where.
2 comments:

Walking with Snails and Slugs

This week has been quite wet and the rain woke up some of the wet-loving creatures in our garden, my favourite creatures of all - snails and slugs. 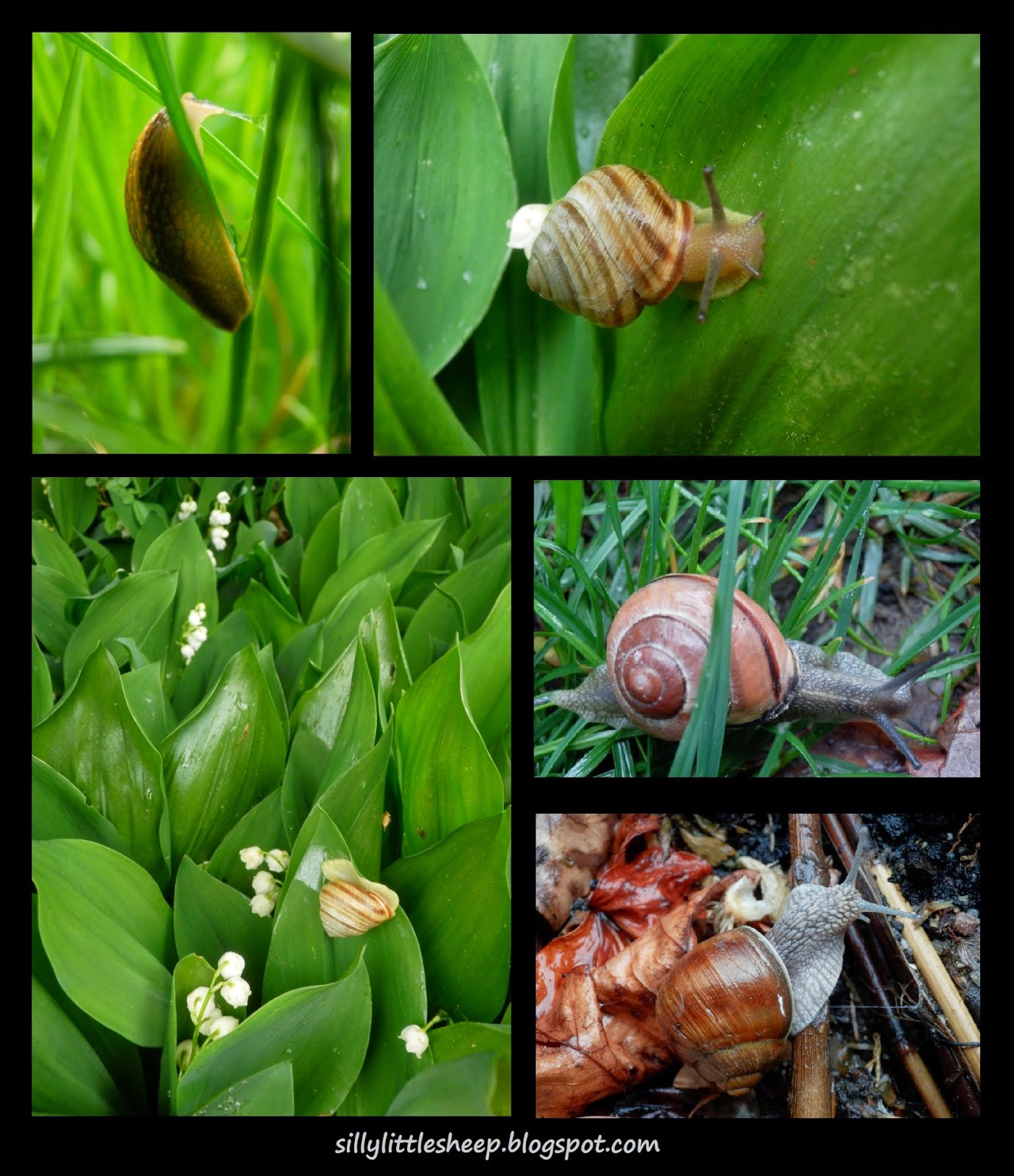 They woke up and ventured everzwhere in search of food - pavement, lawns, flowerbeds, even compost (lots of yummy yummy vegetable leftovers there).

It was great to see the garden so refreshed and inhabited by so many lovely creatures of various species who love the rainy weather. Every time I go out and get caught up in the rain, even though it is terribly inconvenient, I think of it as "snailing weather" and think about all the nice slimy creepy-crawlies that I might meet on my way home.
No comments:

Another super spontaneous purchase, a golden apple snail, has been inhabiting my aquarium lately. A few days later, I noticed it going out of water repeatedly and spending unusual amounts of time there. And when I lifted the lid - a mass of round and slightly shiny pink eggs! 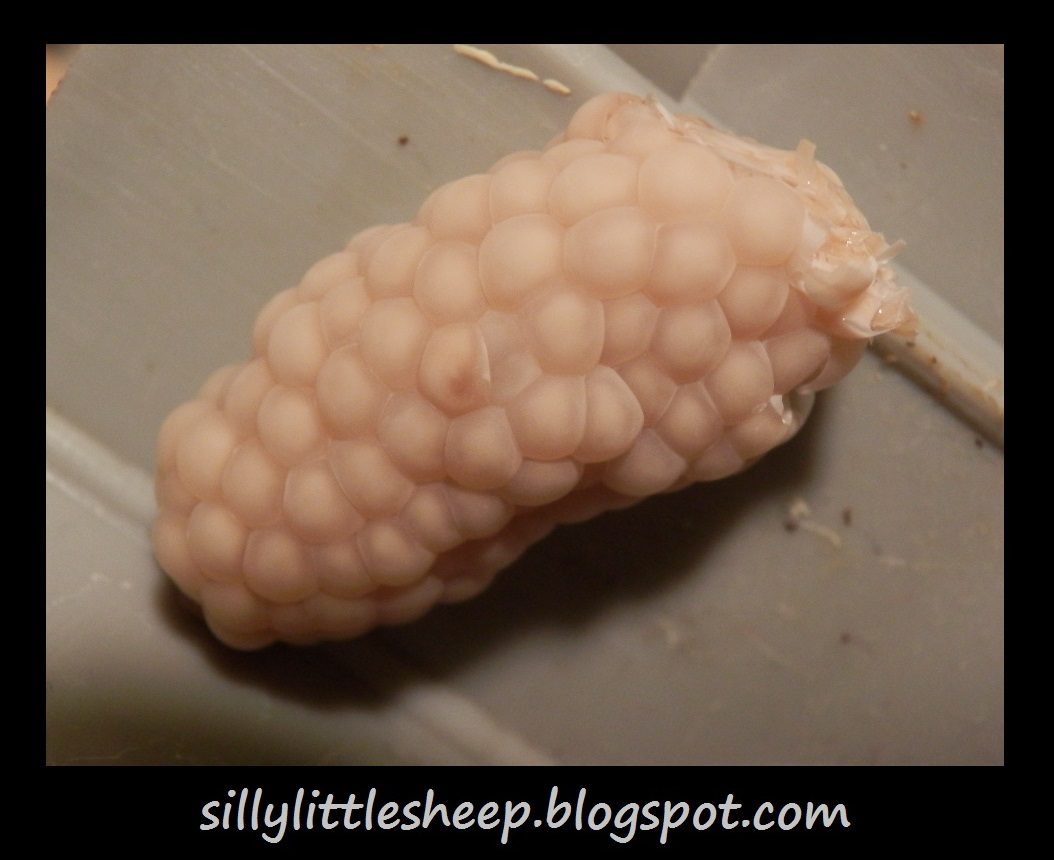 I didn't do anything special, I did not try to maintain the humidity or temperature and yet - a lot of little yellow snails started appearing in the tank! There is about hundres of them right now and I definitely do not want to keep them but keeping some and watching them grow rapidly is really tempting. 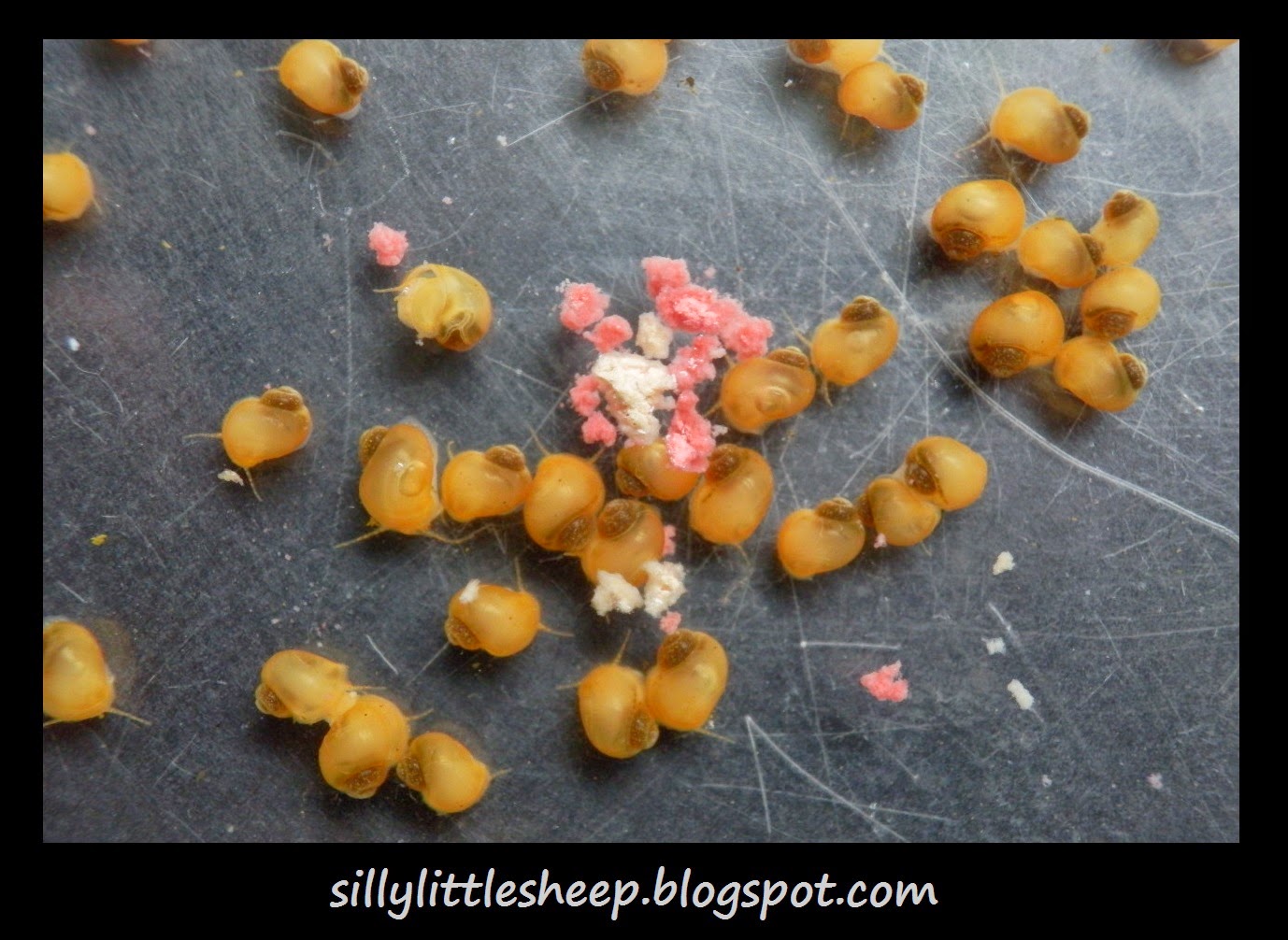 However, I am supplying them to a friend who will use them to feed his terrapins.
No comments:

It's a bank holiday, nobody's home except for me, birds are singing and I was thinking "Eh, I could blog something", but there really wasn't anything interesting enough to blog about other than some mating little flies on my drying pyjama pants in the garden (by now I am also thinking of making a sign that says "No invertebrate sex on my laundry, please!" but since creepy-crawlies cannot read, people would just find me silly, wouldn't they...).

Where was I - oh yes! So I'm picking laundry and suddenly a thing flies and sits down on a leaf nearby. I didn't need long to see that it is an amazing red beetle, so I ran upstairs to get my camera and now I can proudly present my best pictures of black-headed cardinal beetle (Pyrochroa coccinea).


I looked the beetle up in my little pocket atlas of animals and plants and at first, I thought it might be a scarlet lily beetle (Lilioceris lilii), but it looked too shiny and looking it up on Google, I also saw it is somehow smaller than the thing I had on my hand, so I kept looking until I found the one that completelz resembled mz pictures. 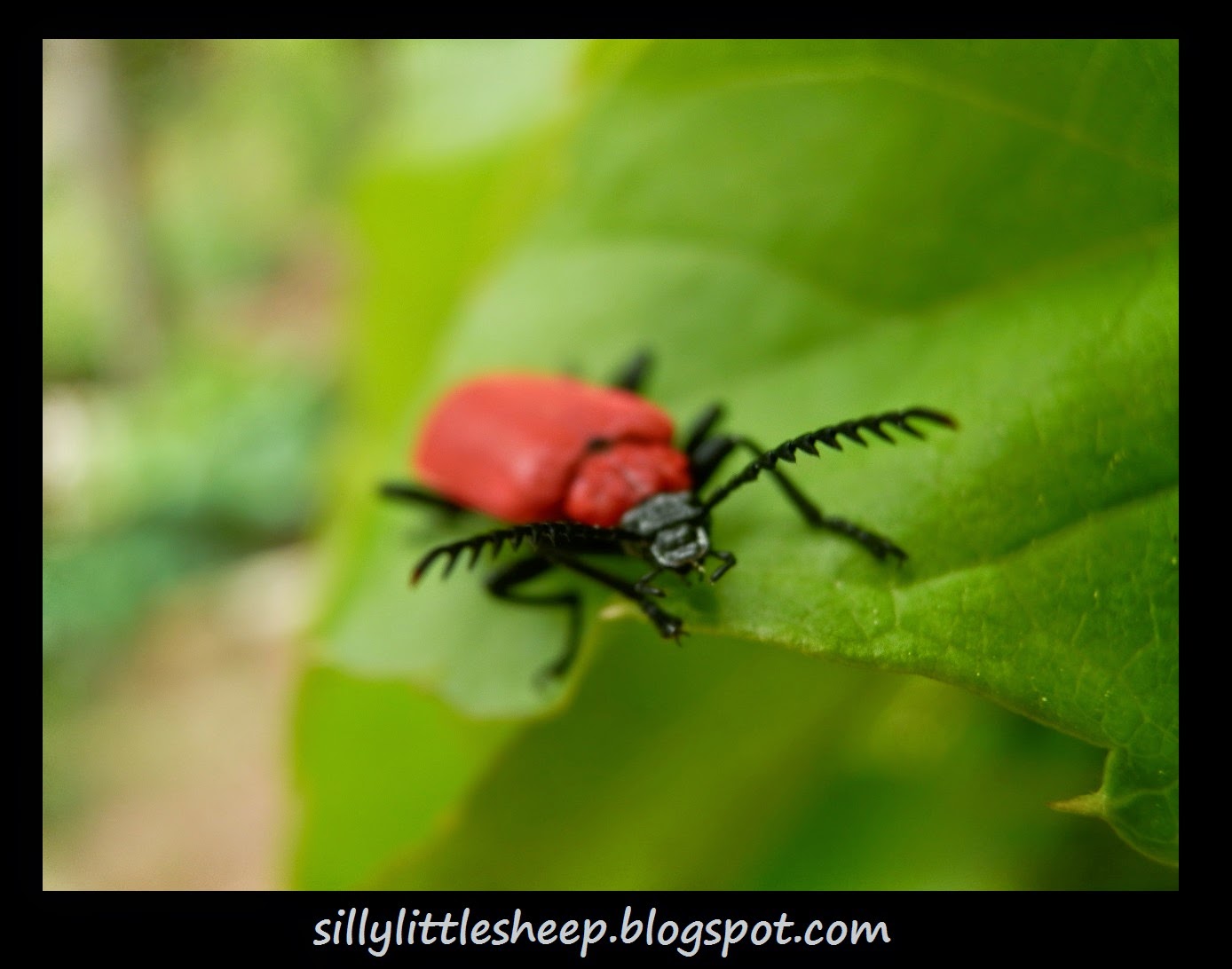 Apparently, according to Wikipedia, these two beetles are easily confusable. The scarlet lily beetles is shiny and has dimples in its wing cases, while the black-headed cardinal beetle's wing cases are smooth. It also has very pretty toothed antennae (have a look at the picture above), which the scarlet lilly beetle doesn't have. 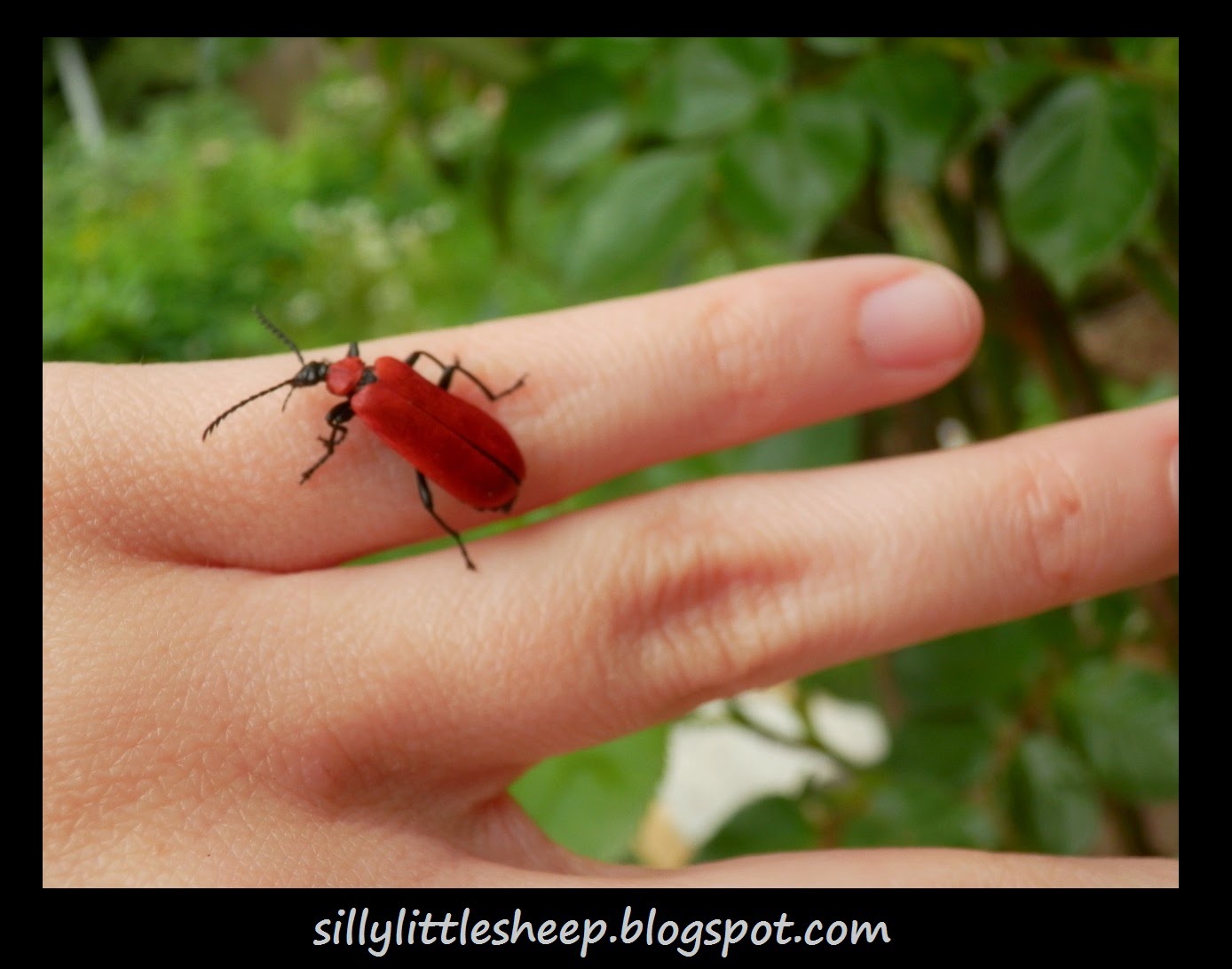 Taking pictures wasn't easy, because the beetle just decided to escape my camera time after time after time. Then it spread its wings and with a little break on my hand, it took off again into the garden. 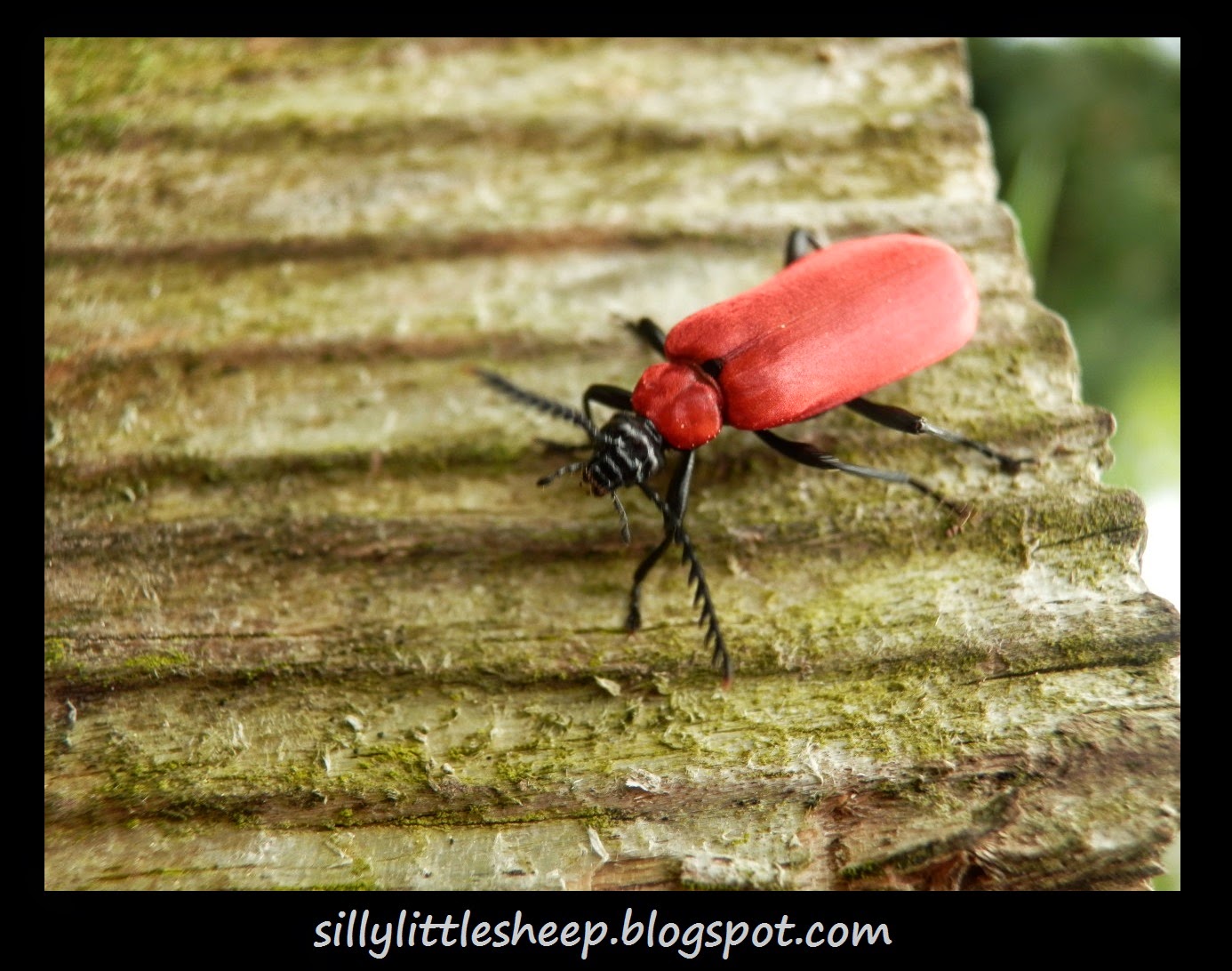 I was able to follow it a little bit, so I saw it land on a little wooden fence we have here. Larvae live under the bark or in old timber where they feed on larvae of other beetles that live there. This leads me to think that maybe this was a parent looking for a place to lay her eggs? Maybe not, but seeing this beetle definitely makes me put some old logs in the garden! 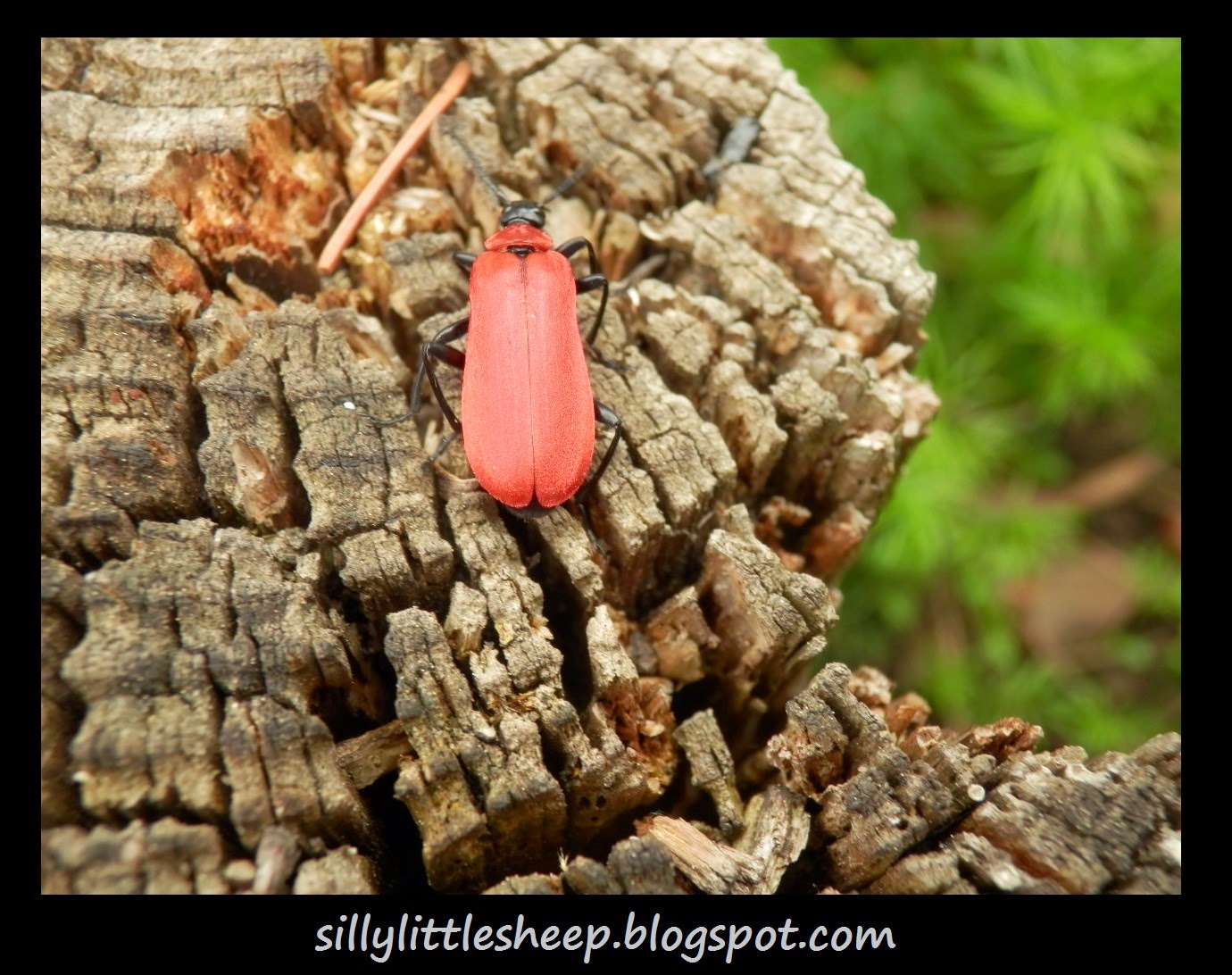